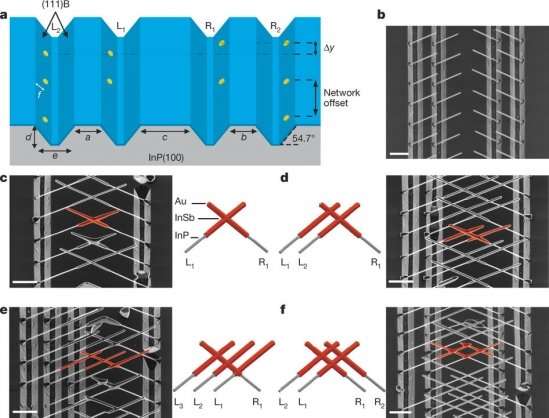 UC Santa Barbara scientists are on the cusp of a major advance in topological quantum computing.

In a paper that appears in the journal Nature, Chris Palmstrøm, a UCSB professor of electrical and computer engineering and of materials, and colleagues describe a method by which "hashtag"- shaped nanowires may be coaxed to generate Majorana quasiparticles. These quasiparticles are exotic states that if realized, can be used to encode information with very little risk of decoherence—one of quantum computing's biggest challenges—and thus, little need for quantum error correction.

"This was a really good step toward making things happen," said Palmstrøm. In 2012, Dutch scientists Leo Kouwenhoven and Erik Bakkers (also authors on the paper) from the Delft and Eindhoven Universities of Technology in the Netherlands, reported the first observation of states consistent with these quasiparticles. At the time, however, they stopped short of definitive proof that they were in fact the Majoranas, and not other phenomena.

Under the aegis of Microsoft Corporation's Research Station Q headquartered on the UCSB campus, this team of scientists is part of a greater international effort to build the first topological quantum computer.

The quasiparticles are named for Italian physicist Ettore Majorana, who predicted their existence in 1937, around the birth of quantum mechanics. They have the unique distinction of being their own antiparticles—they can annihilate one another. They also have the quality of being non-Abelian, resulting in the ability to "remember" their relative positions over time—a property that makes them central to topological quantum computation.
"If you are to move these Majoranas physically around each other, they will remember if they were moved clockwise or anticlockwise," said Mihir Pendharkar, a graduate student researcher in the Palmstrøm Group. This operation of moving one around the other, he continued, is what is referred to as "braiding." Computations could in theory be performed by braiding the Majoranas and then fusing them, releasing a poof of energy—a "digital high"—or absorbing energy—a "digital low." The information is contained and processed by the exchange of positions, and the outcome is split between the two or more Majoranas (not the quasiparticles themselves), a topological property that protects the information from the environmental perturbations (noise) that could affect the individual Majoranas.
However, before any braiding can be performed, these fragile and fleeting quasiparticles must first be generated. In this international collaboration, semiconductor wafers started their journey with patterning of gold droplets at the Delft University of Technology. With the gold droplets acting as seeds, Indium antimonide (InSb) semiconductor nanowires were then grown at the Eindhoven University of Technology. Next, the nanowires traveled across the globe to Santa Barbara, where Palmstrøm Group researchers carefully cleaned and partially covered them with a thin shell of superconducting aluminum. The nanowires were returned to the Netherlands for low temperature electrical measurements.
"The Majorana has been predicted to occur between a superconductor and a semiconductor wire," Palmstrøm explained. Some of the intersecting wires in the infinitesimal hashtag-shaped device are fused together, while others barely miss one another, leaving a very precise gap. This clever design, according to the researchers, allows for some regions of a nanowire to go without an aluminum shell coating, laying down ideal conditions for the measurement of Majoranas.
"What you should be seeing is a state at zero energy," Pendharkar said. This "zero-bias peak" is consistent with the mathematics that results in a particle being its own antiparticle and was first observed in 2012. "In 2012, they showed a tiny zero-bias blip in a sea of background," Pendharkar said. With the new approach, he continued, "now the sea has gone missing," which not only clarifies the 2012 result and takes the researchers one step closer to definitive proof of Majorana states, but also lays a more robust groundwork for the production of these quasiparticles.
Majoranas, because of their particular immunity to error, can be used to construct an ideal qubit (unit of quantum information) for topological quantum computers, and, according to the researchers, can result in a more practicable quantum computer because its fault-tolerance will require fewer qubits for error correction.
"All quantum computers are going to be working at very low temperatures," Palmstrøm said, "because 'quantum' is a very low energy difference." Thus, said the researchers, cooling fewer fault-tolerant qubits in a quantum circuit would be easier, and done in a smaller footprint, than cooling more error-prone qubits plus those required to protect from error.
The final step toward conclusive proof of Majoranas will be in the braiding, an experiment the researchers hope to conduct in the near future. To that end, the scientists continue to build on this foundation with designs that may enable and measure the outcome of braiding.
"We've had the funding and the expertise of people who are experts in the measurements side of things, and experts in the theory side of things," Pendharkar said, "and it has been a great collaboration that has brought us up to this level."
Source:PHYS
For more information about InSb wafer, please visit our website:www.powerwaywafer.com,send us email at: angel.ye@powerwaywafer.com or  or powerwaymaterial@gmail.com.
Posted by powerway wafer_Powerway Wafer Co., Limited at 10:17 PM